Believe It - Or Not!

'Three goals - I can't believe it' declared mouthy Banbury player Simeon Williams as Leamington beat Banbury United 3-1 at the New Windmill Ground tonight. Rebuked by the referee for his constant complaints, Williams declared towards the end of the match (in language probably not heard in Cromwell's day) that the Puritans' performance was '****ing ****'.

In fact the Puritans showed that they can be quite a decent footballing side and certainly asked some questions of Leamington. They also showed real pace, a contrast with Cirencester last Saturday who fielded a 51-year old and a 43-year old.

A well-taken free kick from Stephan Morley (surely but sadly destined for higher things) saw Brakes go ahead through a Liam Daly header on three minutes. Then on 30 minutes the referee awarded the Puritans a penalty with Ricky Johnson scoring.

But within three minutes Brakes were ahead again after Jacob Blyth broke well in front of goal to seize a scoring opportunity.

A Morley free kick saw Brakes hit the post. Banbury then created a period of sustained pressure, but Brakes were able to hold out. Leamington then tested Banbury with a great shot from Lee Chilton which the keeper put out for a corner.

It was announced that a bucket collection for injured player Richard Batchelor had raised £267.

On 89 minutes, with the keeper advancing out of his goal, Jacob Blyth swept through to make it 3-1. It looks as if the young striker is recovering his form while Leamington's play off push is back on track.

Apparently Sir Josh Blake (suspended for this game) was there but I didn't see him.
Posted by Wyn Grant at 23:09 3 comments:

After winning the Fosse Way derby on Saturday, the Chiltern Line derby comes to the New Windmill Ground tonight when Leamington take on Banbury United. In the 1950s they were known as the Gay Puritans according to the Windmill Wonderland fanzine, but these days they are known simply as the Puritans.

However, like the Bardsmen of Stratford Town, their language can be industrial rather than pure. A favourite chant used against Banbury United is 'you all smell of coffee', Banbury being the home of a factory that makes it.

With a number of changes made in the side, including the departure of Lee Downes after an exchange of views with manager Paul Holleran, Brakes have staged a mini recovery. A credible draw away at Cambridge City was followed by a win away at Bedford and Saturday's victory. A play off place may yet be achievable.
Posted by Wyn Grant at 06:15 No comments:

Leamington continued their push for a play off place with a 2-0 victory over Cirencester Town at the New Windmill Ground this afternoon.

It was a dour first half reflecting the dour nature of the visiting Centurions. Brakes pressed hard, but the visitors gave no quarter. The best chance of the half came on 25 minutes when the Cirencester keeper fumbled the ball, but they were able to clear.

Brakes piled on the pressure playing towards the Harbury Lane end in the second half and Jamie Hood connected with a corner kick on 67 minutes to make it 1-0. Alex Tayor then put in a sweet strike from mid-distance on 74 minutes to put the game beyond the visitors.

Brakes continued to play some nice football, keeping the ball on the ground more than they had earlier in the game, but were unable to find the net again.

Big lump Jody Bevan contested every offside decision until the Grecian 2000 model was eventually substituted. Man of the match for me was Stephan Morley.
Posted by Wyn Grant at 17:23 No comments:

Manager's job on the line 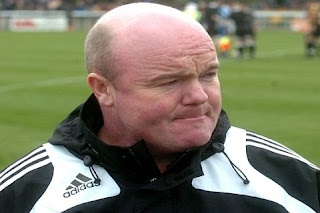 First it was Lee Clark at Huddersfield. Then it was Gary Megson at the Massives. Now the latest manager whose job appears to be in jeopardy is Paul Holleran at Leamington.

The Brakes have gone nine league games without a win and have slumped to 9th in the Evo-Stik Southern Premier League. On Tuesday they lost 0-1 at home to West Bromwich Albion in the semi-finals of the Birmingham Senior Cup.

Holleran told the Leamington Spa Courier 'We're getting into a period where we have to start playing games or it will be me paying the price.' Holleran has been in charge at Harbury Lane for 27 months.