Remarks by Charlton non-executive director Leo Rifkind have gone like a lead balloon with fans.

Rifkind tweeted, ‘Financial sustainability in football means money going out = money going in. This means that the club is its own guardian and is ultimately not dependent on ownership funding. We, the fans, as supporting a club in buying tickets effectively own the decision making of a club.’

VOTV editor Rick Everitt retorted, ‘In what sense are you a fan and who are you to tell us about Charlton? You’re just hired help and you know nothing about what works or doesn’t work at this club. If you had any understanding you’d tell Thomas Sandgaard his pricing is absurd, as fans all know.’

Legal eagle Lauren Kreamer commented: ‘The first is that it's staggeringly ill-timed, coming after a bang-average draw to Forest Green on a rainy Tuesday night with the Valley about 1/3 full (if that), where our lack of summer investment was all too apparent.

The idea that fans not buying tickets is the problem would be laughable if it weren't so insulting. People are lying awake at night wondering how they're going to pay their energy bills this winter, and tickets are over £30. There are a multitude of factors at play.

If fans "effectively owned the decision-making", we would have spent some of the Pope + Burstow millions on a striker this summer, we wouldn't have touched the Robots with a bargepole, and the proper Charlton people who have been "made redundant" would still be at the club.

Anyone who believes that ticket sales alone could ever give financial sustainability is deluded. On Duchâtelet's (admittedly daft) valuation of the Valley, we would have to sell it out at £30 a ticket (with zero other expenditure) over 60 times to buy it back. See the problem?

The idea that fans are to blame for what we're seeing is deeply concerning. It's out of a playbook we thought had been thrown out. If you can ask us with a straight face "how we are prepared to support our club", you have clearly learned nothing in your short time at our club.

It's 30 years since our fans founded a political party, dug weeds with their bare hands, did everything in their power to get us home. I was six months old. 28 years later, I did what little I could to keep our club safe, like so many have done before me. It's what we do.

Supporter groups have tried time and again to share our combined centuries of knowledge about the club we love. We've mostly been ignored. If you genuinely want to hear our thoughts and learn from our expertise, you know where we are.’

Four Four Two have predicted a 11th place finish for Charlton.  They state: 'Owner Thomas Sandgaard wants a promotion push, but a squad rebuild is required.  It may be hard for manager Garner to honour his chairman's ambition in his first season, even with the additions of goalkeeper Jogo Wollacott and centre back Eoghan O'Connell.'

Fan file writer Natasha Everitt goes for an optimistic 6th place finish.   She says that the key player will be Jayden Stockley and the player she'd most like to have back is Joe Aribo, noting that 'We miss midfield firepower.'  She selects Charlie Kirk as the most underrated player.  She draws attention to Deji Elerewe who 'reminds me of a young Joe Gomez who plays beyond his years.'

87 per cent of the Charlton fans who responded to our poll said that they do support a non-league club (remember that the bar for support was set quite low), but there was a big range of clubs supported.

Ebbsfleet United was the most supported club, but accounted for just 15 per cent of all responses. 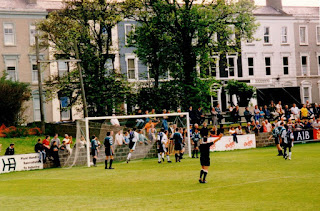 Give your views on Ben Garner as Charlton manager. Create your own user feedback survey
Posted by Wyn Grant at 08:16 No comments:

Swindon Town boss Ben Garner is to be the new Charlton manager.   Richard Cawley of the SLP says that the deal has been agreed tonight, including the compensation paid to the Rocking Robins.

Garner will bring in Scott Marshall and Scott Lindsey who were his assistant coaches at Swindon.   What this will mean for Jason Euell is unclear.

My initial reaction was that I was a bit underwhelmed, but realistically managers of the calibre of Beale or Warburton are not going to come to a League One club that finished in the bottom half of the table.

Swindon fans are unhappy.   One commented: 'We give a rooky manager a chance to prove himself and he kicks us in the teeth as soon as a new opportunity presents itself.'

Garner started coaching at an early age following a serious injury and came through the ranks at Crystal Palace: https://en.wikipedia.org/wiki/Ben_Garner

New survey: do you support a non-league club as well as Charlton?

Create your own user feedback survey
Posted by Wyn Grant at 10:46 No comments:

Of the clubs relegated from the Championship, we have already discussed Derby County whose takeover is still not resolved: https://addicksdiary3.blogspot.com/2022/04/we-face-them-next-year-part-1.html

Barnsley have been through the mill,  At Barnsley, where Chien Lee and Paul Conway are co-chairmen, a spokesperson for the Conway Out! campaign group tells Off The Pitch that it has been “a record breaking terrible season.”

They say that concerns about being part of a multi group model were initially overlooked “due to our excitement that we were bought by a consortium with a net worth of £9 billion.”

Billy Beane, the legendary baseball executive of “Moneyball” fame is also a Barnsley shareholder. But the Conway Out group say that the Moneyball football decisions have been disastrous for the club. They allege that the style of play that got Barnsley to last year’s play offs was changed “because there wasn’t enough interest in our players due to our direct style.” They claim this was adopted so the owners “could sell our players for more profit.”

The benefits of being part of a Multi Club Ownership (as practiced by Roland) have been at best opaque. “The only real effect on us is that some of our younger players have been loaned out to Esbjerg and a few of our players who weren't good enough were transferred to Nancy and Oostende. But apart from that, there hasn't been any other effects yet.”

The spokesperson added: “I’d love to think that this is just an exception, and one bad season at Barnsley due to a few bad decisions due to the ownership group. Unfortunately, we aren't the only club in the ownership group that have been relegated this season, with Nancy officially relegated and Esbjerg on the brink of relegation.”

Barnsley may not find it easy next season.

Peterborough United are not one of my favourite clubs, partly because of their very physical tactics at The Valley a few years back when, as usual, we got little protection from the referee.

The Posh have plans to move out of their rather ramshackle London Road ground, but the riverside site planned for the new stadium is controversial and funding is unclear.

They are a club who think they are entitled to be in the Championship, but have great difficulty staying there when they do get promoted.   However, I rate Grant McCann as a manager and they will be a handful next season.