A Day with Liverpool Academy 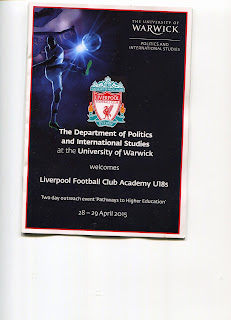 We hosted Liverpool Academy for a couple of days. The lads were modest and appreciative of what was being made available to them. They all have agents, though, and the left back told us that he is on 3k a week.

I thought that they would slaughter our first XI and they dominated the first ten minutes. The first time a Warwick player struck the ball there was a cheer from the crowd of a few hundred. But the home side grew in confidence with History student Jake Allingan capable in goal. Liverpool were composed in their approach work, playing the ball along the ground and their penetration was good. However, they were less impressive in the final third and their finishing was less than clinical. Then Warwick seized their opportunity and English literature student Stuart Bryan put Warwick ahead before half time.

Liverpool equalised after the break with a tap in, but Bryan pounced on a keeper error to make it 2-1. Liverpool then equalised from a corner and then went 3-2 ahead. A well struck penalty for Liverpool seemed to put the game beyond doubt, but Warwick made it 3-4 from a corner. A good, competitive game of football.