A weekend without football 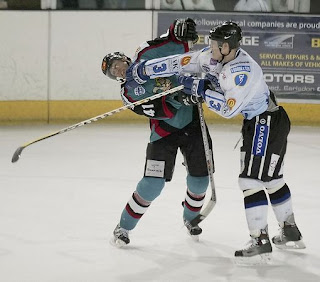 No Charlton match this weekend, of course, with England in action - I don't count watching that on television as seeing football. Leamington are away at Aresley Town which appears to be in some particularly god-forsaken part of Bedfordshire. It's nearly two hours drive from the Royal Spa and the Bloke Behind Me lives in Bedforshire, so I'll give it a miss although I haven't seen the Brakes for a while.

I did think of going to see Rushden and Diamonds in the Conference, but they are playing Torquay on Sunday, presumably in front of the Setanta cameras. I do have the option of going to the Coventry Arena on Sunday evening to see Coventry Blaze play Hull Stingrays, but as it looks as it might be a nice weekend, I might just focus on the garden.

In any case, it's been a frentic week with the media. Today my press officer has been touting me as an expert on Iceland which is a somewhat dubious claim to say the least, but given that the only real expert is in Aberdeen, I can see where he is coming from. Sky News have just been on the phone seeing if they can get a satellite truck to me, but it seems they are too far away in the Friday traffic. But at the moment I am on stand by, so I'll just have to wait around for a while.

The new talking point at Charlton is the possible return of Ambrose to Ipswich. Would we miss him or should we 'cash in' and let him go? For me, he shows real talent now and then in a match, but often seems to drift out of the action. For a striker I think it's fine to be a goal poacher, appear to be nothing for a while, then suddenly pounce and score: in a sense that was what Sir Clive Mendoca did. But for a midfielder?
Posted by Wyn Grant at 15:26