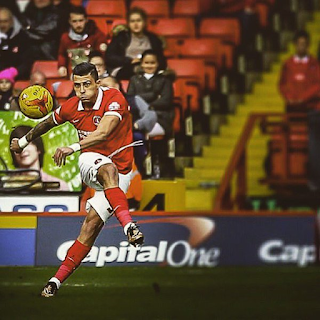 Charlton looked more organised against Blackburn Rovers today than they have for some time, but their reward was just a point.

The Addicks went ahead on the half hour when Johann Berg Gudmundsson's free-kick fell to Harry Lennon, whose effort deflected past Jason Steele. But the end of the first half is always a dangerous time for the Addicks. Rovers levelled on the stroke of half-time when Jordan Rhodes nodded in Adam Henley's right-wing cross.

Rovers put Charlton under sustained pressure for the first ten minutes of the second half, but they managed to hold firm. Craig Conway and Shane Duffy had headed chances for Rovers after the break, with Henderson having to save well from Conway, while the energetic Igor Vetokele tested Steele.

With minutes remaining substitute Reza collided with Rovers keeper Steele as he tried to pounce on a loose ball. The referee re-started the game with a Rovers free kick.

The Salopian referee ignored cynical fouling by Rovers, particularly against Watt, and only awarded a yellow card in the dying minutes of the game. We do, however, need to stop giving away cheap fouls.

This report deals with the protests as well as the game itself: The Guardian

The Blackburn goal could be seen as an own goal as it hit the post and bounced in off Henderson but he made a good save in the second half. Lennon seized the chance to score and generally put in a decent performance. Teixeira looked very solid and quite an imposing presence to me, although he is no Jorge Costa. Fox had a better game than usual. Solly was industrious and committed as always.

Bergdich was a surprise inclusion but he had a decent game until he was substituted. Cousins contributed well, one very good corner. Jackson did his best. Gudmundsson was anonymous in the first half. He became more involved in the second half and did draw a save from the keeper, but he doesn't seem to me to be the player he was at the start of the season.

Vetokele played well, but tired and had to be substituted. Watt was the same only Tony Watt, talented, troublesome for the opposition defence, but too greedy and selfish.

Harriott was energetic, but gave away his usual cheap fouls. Reza tried to liven things up.

lewis the ref was absoulute crap yesterday by far the worst ref weve had down here all season -got chatting yesterday to an old directors grandson and peter varney sister as well we made our feelings pretty clear even got a one jonathan Acworth on the microphone from rick got a applause so I must be doing something right!me and wyn handed out flyers up Floyd road handed out whole box

Hey Wyn. This was what I wrote on the local news blog Transpontine. Simon. http://transpont.blogspot.co.uk/2016/01/charlton-protest-give-our-club-back.html