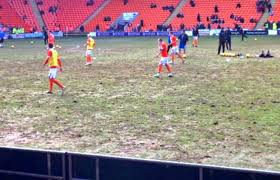 We had problems with our pitch last year, but it looks as if Blackpool are having problems this year. If the tide was out, we would be better off playing on the beach and there would be donkeys there as well. It's going to be hard to play football on that surface.

When we are complaining about the current regime at Charlton, we should remember that there are many that are worse, the Oystons at Blackpool being a prime example. Quite what their vision, narrative or strategy might be is far from clear, but it looks like ending up with the club in League One. There have been serious potential purchasers of the club, but they seem determined to hang on.

According to the claims made in this report, contact with the owner of Blackpool FC can allegedly give rise to alarm: Models locked themselves in bedroom

rem when charlton last played on a sandy surface the 4-0 defeat at chelsea couldnt happen twice could it?

Oh yeah I remember them sand pit days n all though when I last went to see ourn play there they drew 1-1 n Marcus Bent scored. The board ave done a great job investin in out pitch n drainage, but ourn should be used to playin on a bog pit from lass season so less ope they remember ow to cope away from our gaff n all.

fuck me did I read right simon church just fucking scored I need a stiff pint!