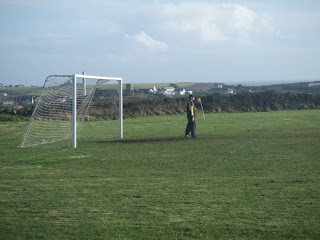 The one sure name on the Charlton teamsheet is Rob Elliot (we hope), but in an emergency we could always call on Merryn Smith. Seen here at the Garrison Field in the World's Smallest Football League, the hapless Garrison Gunners don't seem to be troubling the Woolpack Wanderers keeper all that much.

On Christmas Eve, I watched Victoria Wood's Christmas programme. It was a bit of a curate's egg and one of the least successful skits was the 'Midlife Olympics' which were staged at Brentford's Griffin Park. Makes sense: it's just down the road from the BBC Television Centre and no doubt the Beehive comes cheap.

A good friend of mine is a lifelong Brentford supporter. By lifelong I mean lifelong: he has lived all his life in the same house in Acton. But now he has having a struggle to prevent his children becoming Gooners or even Super Hoops.

Brentford were at one time a more successful team than they are today. I have a DVD of the Arsenal Stadium Mystery: when asked to explain the murder, the manager says 'I didn't see it.' There are extensive excerpts from a game between Arsenal and Brentford: it all looks very kick-and-rush.

By 1936-7 Brentford were the 8th best supported Division 1 club. However, they got relegated from the top flight in the first post-war season, never to return. In West London, they have to compete with the Super Hoops of Queen's Park Rangers and Chelsea as well. There has been talk of moving to a new stadium in the direction of Heathrow, but it never seems to come to anything.

Some people dismissed our hard fought victory over them in front of the Sky TV cameras at The Valley as just another one over a lower table side, but many pundits were tipping them for at least a play off place at the start of the season. They are clearly a decent enough League 1 side.

Charlton have managed to create problems for themselves. Passion can be a double edged sword and Sam Sodje has been banned for four games as it was his second red of the season and his third straight red since joining the club. Some people have been suggesting that Mambo should be recalled from the Staines Massive, but Semedo will have to slot into the centre back role. With Dailly still ill, Llera will have to try and match his heroics in attack on Boxing Day by showing sufficient sharpness in defence.

Charlton Athletic Online has already made the point that a 4-5-1 formation is a likely reaction to the absence of Deon Burton. Burton will be missed because he is a very effective player, not just in terms of scoring goals. Whether he thought that punching the ball into the back of the net was some sort of Christmas comedy routine I don't know, but it was as unfunny as many of the Christmas offerings on television and one can hardly blame the referee for applying the laws of the game.

The bookies have now decided that Norwich are the hot favourites for automatic promotion along with Leeds and that seems to be the agenda of the Football League programme on television. However, as Alan Curbishley used to say, 'It's a long old season.' Norwich are away to Walsall which should be relatively straightforward for them if they are as brilliant as some people claim, but Colchester have a trickier match at home to Southampton.

Charlton are turning into draw specialists and I am forecasting a share of the points at Griffin Park at 1-1, but it could well be a defeat. I won't be going, partly because of the difficulty of parking and partly because, having taken a few days off, I need to catch up with work. Paul May will be there and will be providing his usual authoritative commentary.
Posted by Wyn Grant at 06:07