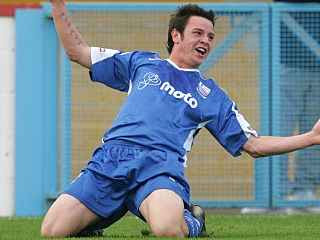 Normally reliable sources are denying claims that Charlton have shown interest in Rushden and Diamonds left winger and former Leicester City Academy player Lee Tomlin. The Addicks could do with strengthening on the left wing. While the experiment with Luke Holden did not work out, Conference teams are often near League 2 standard. The 21-year old has scored 11 times already this season and is expected to move up to a league club in the transfer window.

One of the problems is that Rushden manager Justin Edinburgh is putting too high a valuation on the player, stimulated by interest from the likes of Coventry, Newcastle and, er, Walsall. There has even been speculation that he would like to break the Conference transfer record of £260,000, but it seems that the cash strapped manager would settle for a smaller six figure sum. The only concrete interest seems to have come from nearby Peterborough where it is thought that Tomlin could link up with super signing Izale McLeod.

During the Curbishley era, links with the Irthlingborough club (then in the Football League) were quite strong through player loans and special reserve team matches. However, the financial wheels came off at Nene Park and Rushden have had to settle for Conference survival, although they may make the play offs this year.
Posted by Wyn Grant at 06:09