Jermaine Beckford has withdrawn his transfer request and has informed doubting Leeds fans that he gives 100 per cent every time he puts on the shirt: Beckford

Whether this is the end of the wobble at Leeds remains to be seen, but there has clearly been some unhappiness in the camp, possibly not assisted by the tactful interventions of Ken Bates. As one perceptive Addick fan commented, Leeds fans are a bit like Spurs fans. They expect constant success and the moment something goes wrong they start to turn on the team. 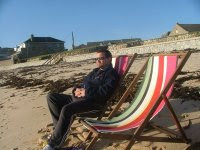 BTW, sorry that we don't have a match report from the weekly clash on the Scillies yesterday. Radio Scilly sports show host Merryn Smith was supposed to send us one but instead took a deckchair down to the beach near his home. Jammy so-and-so. He is training hard for the London Marathon, though, and in due course I will give details of the charity he is supporting.
Posted by Wyn Grant at 05:40