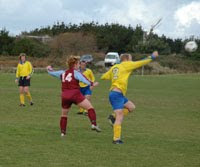 Action from the Garrison Field


Leeds beating Manchester United at Old Trafford was the overwheming surprise in the third round of the FA Cup. There was also a shock result on the Isles of Scilly where Woolpack Wanderers have lost only one game in the two team league this year. Garrison Gunners won 6-2 in the first leg of the Foredeck cup. 2 goals from Eddie Williams, 2 from Andy Hicks and 2 Phil Greenlaw. The Wanderers' goals came through an own goal from Mark Blyth and one from Jack Stone. 1-1 at half time with the Gunners kicking against the wind - and do they have real wind on the Garrison Field which is on a plateau above the metropolis of Hugh Town on St.Mary's.

The second leg will be played on a forthcoming Sunday at the Garrison Field.

The official Fifa video about football on the islands (quite well made) is here:
Fifa

The Radio Scilly sports show will start again this Friday from 5 to 6, but with station chief Keri away on holiday for a month, No.2 and green army fanatic Steve Watt has ruled out any Charlton content - despite the discovery of Charlton connections on the island of Tresco.
Posted by Wyn Grant at 15:57